Five or so years ago my car was totaled. It was a silver  2001 Toyota Prius, and It was completely paid off. I bought it when I was still working as a software Q.A. engineer. When it was deemed a total loss I had to choose a new car that fit the budget of an actor. Giving up on hopes of ever buying another Prius, I bought a little red 2008 Toyota Yaris. To soften the loss of my beloved Prius I wanted to buy an Autobot decal for the hood. But I couldn’t find one. Searching the Internets only returned one source that said the item was out of stock. 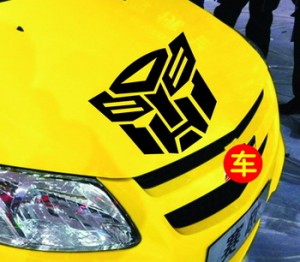 The world of car detailing is a totally alien landscape. Ironic since my family was supported by the car industry and I grew up surrounded by them. But I didn’t search very long. I mentioned this to my partner and she asked why not search online again. I answered, “I’m just not committed to the cool”.   What does that mean? Sometimes I want something just because I think it will look good. Sometimes I want something because it feels like an expression of my creativity. Both of these are things I think are cool. The difference is if something doesn’t have that feeling of self expression, I have a finite amount of effort I’ll put in to it. I was trying to get the decal as a consolation prize. I didn’t really want the decal. I wanted my old car back! It was cool. It was my kind of cool: less pollution, less money on gas, and paid off. Did I mention paid off? Buying the decal I was trying to force a cool I really didn’t want.   Eventually as it takes more and more effort or time to achieve “the cool” that’s not true to me, it becomes less important. Instead of putting a Transformers decal on my car I’ll just watch some episodes of the cartoon on the web instead.

There are other “cools” that are in tune with my creativity and the effort to find or maintain them is fun. Like my bowler hat.  I wore a bowler as part of my costume in “Ragtime!” and I knew I had to own one. It took some time and a significant investment but I found the right one. As I’ve learned over the years quality hats require quality care and effort.  But all that commitment feels like part of the prize.

Its a cool that feels true to me and a cool I am committed to because it comes from a place of good feelings and alignment with myself. And the reflections I get from the outside world echo that positive energy.

So what cool are you committed to?