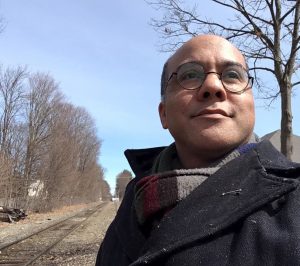 Alan White (they them) is pursuing an MFA in acting at L.S.U. Before auditioning for program Alan performed a myriad of diverse characters during a career that spans over two decades.

In 2018 Alan produced their solo show Royally Unseen hailed as engage, profound, and almost too honest to bear, Royally Unseen is the mostly true Fantasy of a Black man coming of age in the high expectations of family and prejudice of America.  Royally Unseen ran for 3 weeks to enthusiastic audiences. Alan has forged a name in the theatre performing in countless productions. they were part of the original cast that devised and performed the world premiere of Matchless and the Happy Prince by Gregory Maguire (Wicked). They also performed in the world premiere of Protocol by Brenda Foley.

After graduating from UMass. with a BA in theatre, Alan auditioned for the New England Shakespeare Festival 1998. They were cast in a touring production of The Taming of the Shrew. New England Shakespeare festival was a pioneering company in original practices Shakespeare. Alan returned to the company for productions in 1999, 2000, and 2004. In 2001 Alan auditioned for Theatre Espresso an applied theatre company performing interactive dramas for students and dedicated to fostering critical thinkers and true citizens. As a company member Alan performed in every play in the repertoire and originated roles in the 5 new works. Alan was an active company member until starting graduate school in 2019. Once the world of applied theater was opened, they worked with many companies serving diverse communities creating and performing work with Harvard University Boston University, Tufts, and Harvard medical schools.

Shortly before the launch of Royally Unseen Alan won the Massmouth Storytelling competition. A master storyteller they have been featured twice at the annual Boston book festival. Alan performed an original story on Stories from the Stage: Kitchen Confessions. Their storytelling experience extends over decades, of practicing creating enchanting connections with dozens of audiences.

Alan is drawn to theatre because they love the energetic connection created between fellow artists and the audience. As an acting teacher they strive to empower other artists to have agency over their art and their career.