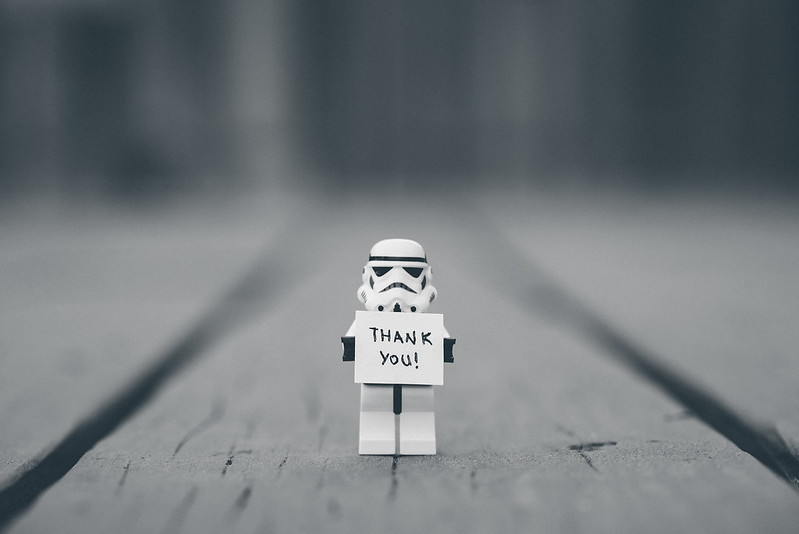 Photo: “Thank You” by Reggie Ballesteros

It’s november and recently I’ve been getting a lot of reminders to practice gratitude. Right now I want to offer a sincere thank you to the Boston Theater companies for rejection letters. Nope I’m not being snarky. While I’m disappointed every time I get a little email saying a director has gone in another direction or can’t offer me a part at this time, the email itself, even if it is just a form letter, is a professional and kind act.

I’ve been lucky enough to have a lot of jobs in a lot of industries. I’ve also had a lot of chances, good or bad, to look for jobs. Outside of theater rejection letters are rare. Even now when digital communication as natural as breathing, a job submission, or project negotiation my abruptly be met with radio silence once one party hears something they don’t like.

As an actor it’s easy sometimes for me to take these communications for granted, specially when I have received a lot in succession until I’m pursuing projects outside of theater and am reminded how it feels when the other party doesn’t take the time to communicate. In theater we talk openly about how actors “put themselves out there” at every audition all the emotion the hope, excitement and possible let down of the process. Maybe mindfulness of that contributes to the culture of communication we have in our community. I’ve been on both sides of the interview table in a few places, and The woman going for the software development position, or the guy trying to get the entry level graphic artist gig is putting herself or himself out there just as much as any actor, with all the emotions and excitement and let downs, it’s just manifested in a different way. Maybe it’s easier to forget someone is making plans based on your decision in other industries.

Anyway, to any Boston theater companies who’ve taken the time to communicate rather than leave me to figure it out (which I think is all of you at least once.) Thank you.