My first visit to Provincetown began at Long Wharf waiting for the Ferry. It was a little chilly. I had a Ticket for the boat, a big suitcase and my backpack.

My cast mates arrived just moments before we disembarked and sailed down the coast of Massachusetts.

For 90 minutes the ferry sailed on the ocean. We weren’t far out to sea but in a way it still felt a little isolated.

Until we reached Provincetown. Then it felt like stepping through the wardrobe into Narnia. The place was unfamiliar but we were met by familiar faces. And it seemed like The last cheer of summer had hung back in this part of the world.

Everywhere you turned there seemed to be someone friendly who knew why you were there and was able to help. It was one of the warmest welcomes I have ever experienced. It felt like the entire community of Provincetown is part of the festival. 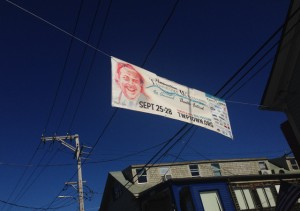 It is a gift to be a part of it. The artists technicians and scholars come from all over the world. They are at the tops of their craft. They walk and work among the most notable persons in theater and film.

I kept wondering Who thinks that I deserve to be with these people? And I was very grateful someone did.